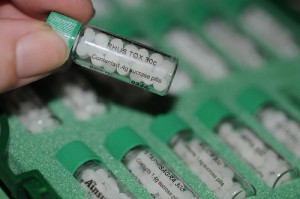 Anne, aged 70, had a considerably overloaded gall-bladder. Her medical specialists were reluctant to treat her surgically because of high blood pressure and an inherent cardiac weakness. She was also dramatically susceptible to reactions from drugs. Hence the medical referral, my hands not being tied, and the bonus of medical monitoring.

Anne is a retired nurse who is stoically stubborn with a great sense of humour. Although born and bred in Jamaica, she had trained and worked in the UK all her working life. Partly thanks to her Caribbean upbringing, Anne taught me a lot. For example, when I explained that constipation would contribute to the pressure on her diaphragm and, therefore, her upper abdomen (her bowel evacuations were every 2-3 days), Anne told me how her mother would brew up Quassia Chips from their garden to regularly ‘flush out’ both Anne and her siblings. She swore it was far more bitter than the Wormwood Tincture I gave her during her first consultation, so she wasn’t going to disagree with my ‘bitter as gall’ initial prescription.

The great part for me was to watch her face gradually become less contorted from the pain she started with, and after 15 minutes when I asked how bad the pains were, her reactions, though expected from past experiences with similar conditions, were a joy. Initially she looked perplexed and then astonished. She couldn’t believe the pains under her right shoulder blade and in her right-to-centre upper abdomen had gone. Unfortunately, this wasn’t a cure but was purely palliative with the numbing and stomachic actions of the Wormwood. Nevertheless, Anne was grateful and we proceeded with the consultation.

There are a number of ways to flush the gall-bladder and, over the years, in our consultancy we’ve encouraged patients to take photos of their ‘results’ to their GPs. The majority of gallstones are compressed bile, looking like cooked broad beans; the younger stones look rather more like petit-pois (saponified biliverbin); stones of compressed, hardened bilirubin take on the shape of dark red, irregular-shaped dice. These green and red formations are largely due to long periods of alkalosis (above normal bicarbonate concentrates) where the calcium, precipitated with cholesterol, forms an insoluble ‘soap’.

Anne found it hard to believe that most of her wide-ranging symptoms were related – upper and lower gas, abdominal distension, headaches, nausea, dizziness, sleeplessness, plus more, though she was fully aware of the relationship to gallstones of pain at the back of her shoulder, localised pains, occasional jaundiced-looking eyes, and the lower ‘gas’ issues. We shook hands on the majority of her other symptoms ‘going with’ the gallstones.

My initial prescription, apart from the First Aid mentioned above, was aimed at softening up the gallstones with:

a)    0.5 litres of diluted apple juice a day for 3-4 weeks – the malic acid therein is the softening agent

b)    Homeopathic Calc Carb at an appropriate potency for the patient. This too is effective in softening, even dissolving, calcarious deposits, which are the coral calcified variety of gallstones

It is always gratifying to see the crumbly calcarious gallstones evacuated into a fine-meshed sieve when our patients undertake the ‘Emergency Gall-bladder Flush’ but this wasn’t appropriate for Anne due to her severe back pain, arthritic knees, sciatica and muscular weakness which meant she couldn’t cope with getting up from the floor unaided during and after the essential coffee enemas. 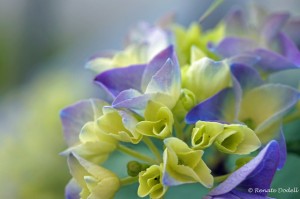 Even with this gentle, personalised and unintrusive approach, there was a missing factor to consider, Anne’s circulatory system. When I asked her if she had palpitations she said it felt more like throbbing and drew aside the neck of her cardigan to show me her jugular vein pulsating away dramatically. I prescribed homeopathic Belladonna, which she started there and then. I explained how to monitor the benefits and suggested she should start the Calc Carb a week later when she could move into an ‘if required mode’ with the Belladonna. So we went ahead with the apple juice, homeopathics and the herbal tincture Hydrangea Root (a powerful antilithic), the latter to be taken three times daily before food until the time of her next scan.

We were very fortunate having her specialists monitor the clearing of Anne’s gallstones. After 16 weeks she was off the whole prescription. More importantly, she was out of pain quickly but persevered with the programme until given the all clear from scan results. Throughout, Anne was receiving dietary advice from her medical specialists and from me. The standard low-cholesterol diet was obviously applicable, but this is often insufficient as the liver manufactures cholesterol, even on a totally fat-free diet. Extensive research has shown that deficiencies of ascorbic acid and vitamin E promote cholesterol gallstones. Studies have also found that a deficiency in essential fatty acids can contribute to gallstone formations. Animal and human studies have shown the amino acid Taurine inhibits these formations by increasing the flow and excretion of bile. Thus we made various dietary recommendations and introduced an ACE Selenium supplement that Anne now ‘swears by’ as her arthritis has been greatly relieved.

Angela Bradbury is the Director of the Holistic Health Consultancy and College, London. She can be contacted on 020 7834 3579.